Agassiz Seed has alfalfa seed varieties that range from the highest yielding premium quality varieties to lower end stable varieties.   Whatever your current needs are we have you covered.

This showy dark green variety is the next generation of alfalfas showing outstanding forage yield and quality.  Mega-ton delivers stronger early seedling growth and rapid recovery after each cutting.  The high leaf-to-stem ratio and multi-foliate expression allows this variety to produce more tons per acre than other varieties.  Mega-ton was selected for its forage yield and quality, stand persistence and its high resistance to all major diseases.

For the most progressive alfalfa growers, our proprietary Maxi-Ton Pro stands above the rest. It is an extremely high-yielding variety with the fastest re-growth potential in our alfalfa portfolio. The opportunity for additional cuttings, coupled with an impressive disease package and very fine stem, makes this the best choice for producing a profitable forage.

For those producers needing a mixture of the top of the line varieties, Versa-Ton Brand Alfalfa is for them. This blend offers the best and highest yielding proprietary alfalfas in our line-up. A combination of our high yielding Maxi-Ton and Mega-Ton Alfalfas, the salt tolerance of Barricade II Alfalfa, the sunken crown and prostrate growth of Foothold Alfalfa and the branch rooted trait of Shockwave BR; this blend will perform under nearly any conditions. Versa-Ton also provides a top quality disease package and rapid recovery after cutting. A must have for the progressive alfalfa grower.

For-Max Brand Alfalfa is a high-yielding, winter hardy blend of proprietary alfalfas adapted specifically to the Northern Great Plains. The large leaf matter delivered from the For-Max product makes this option an extremely high quality, palatable forage. With an excellent disease rating, this product will produce powerful tonnage in a variety of environments.

Barricade II is the next generation of salt tolerant alfalfa and replaces Barricade SLT. This variety was selected for both improved germination and forage production under high salinity conditions. This variety will allow producers to improve production and profits while utilizing all the acres available to them. Barricade II will also produce high yields on normal soils. The ability to grow under most any soil conditions, a complete disease package and excellent winter hardiness will allow for maximum production during the life of the stand of this variety.

An alfalfa with high multi-foliate leaf expression, this product features a great leaf to steam ratio, which should allow for better palatability and digestibility as a quality forage. With a solid disease package and great yield capacity, Multi-F-2 will prove to be a solid option for producing a high-quality forage.

This long-lived alfalfa was bred for its oversized and deep-set crown, making it more tolerant to field traffic.  Foothold is great at filling in unseeded and bare ground due to its spreading ability and prostrate growth pattern.  Its high disease resistance along with its strong persistence and winter hardiness will provide for longer productivity compared to other varieties.

Shockwave BR combines an excellent disease package and a branch rooted trait to deliver outstanding performance under those higher water growing conditions. The branch root of Shockwave BR allows more of the root system to grow above the water table which gives this variety better resistance to heaving pressure created by freeze-thaw cycles. This feature along with its high forage production, makes this a great variety under varied growing conditions.

Algonquin is a very winter hardy alfalfa with a wide crown producing many fine leafy stems. Algonquin is a deep tap rooted plant with medium sized leaves and is well suited for pure stands and with grasses for pastures. Algonquin is popular in the Northern Plains because of its versatility, hardiness and yield potential. Developed by Agriculture Canada and released in 1972.

Ladak is a drought tolerant, winter hardy alfalfa used in the western areas of North Dakota and South Dakota. Ladak tends to recover slowly after cutting and hay yields are reduced with the second or third cutting most years. USDA introduced Ladak from northern India in 1910.

Ranger is a winter hardy tough alfalfa used in many areas of the upper Midwest. Ranger shows some resistance to bacterial wilt, but is susceptible to leaf spot diseases. Ranger recovers quickly after cutting, has plants that vary in habit of growth from semi-upright to upright. Ranger was developed by the Nebraska Agricultural Experiment Station and USDA and released in 1942.

Vernal has been the standard of the industry for many years. It exhibits good winter hardiness, has moderate re-growth after cutting, is fine stemmed and has dark green leaves. Vernal is used mostly for hay production in medium rotation applications. Vernal was developed by the University of Wisconsin and released in 1953.

Travois is well adaped to the severe climate of the Northern Great Plains and shows the ability to grow and reproduce by a spreading root system.  Travois should be used primarily in permanent or semi-permanent pastures or in ranges.

Falcata alfalfa, also known as yellow-flowered alfalfa, is a subspecies of alfalfa that has great drought tolerance and winter hardiness. Falcata is trifoliate with multiple stems and a woody crown. Its roots are more branching and fibrous than most purple-flowered alfalfas and it tolerates soil pH's up to 8.5. 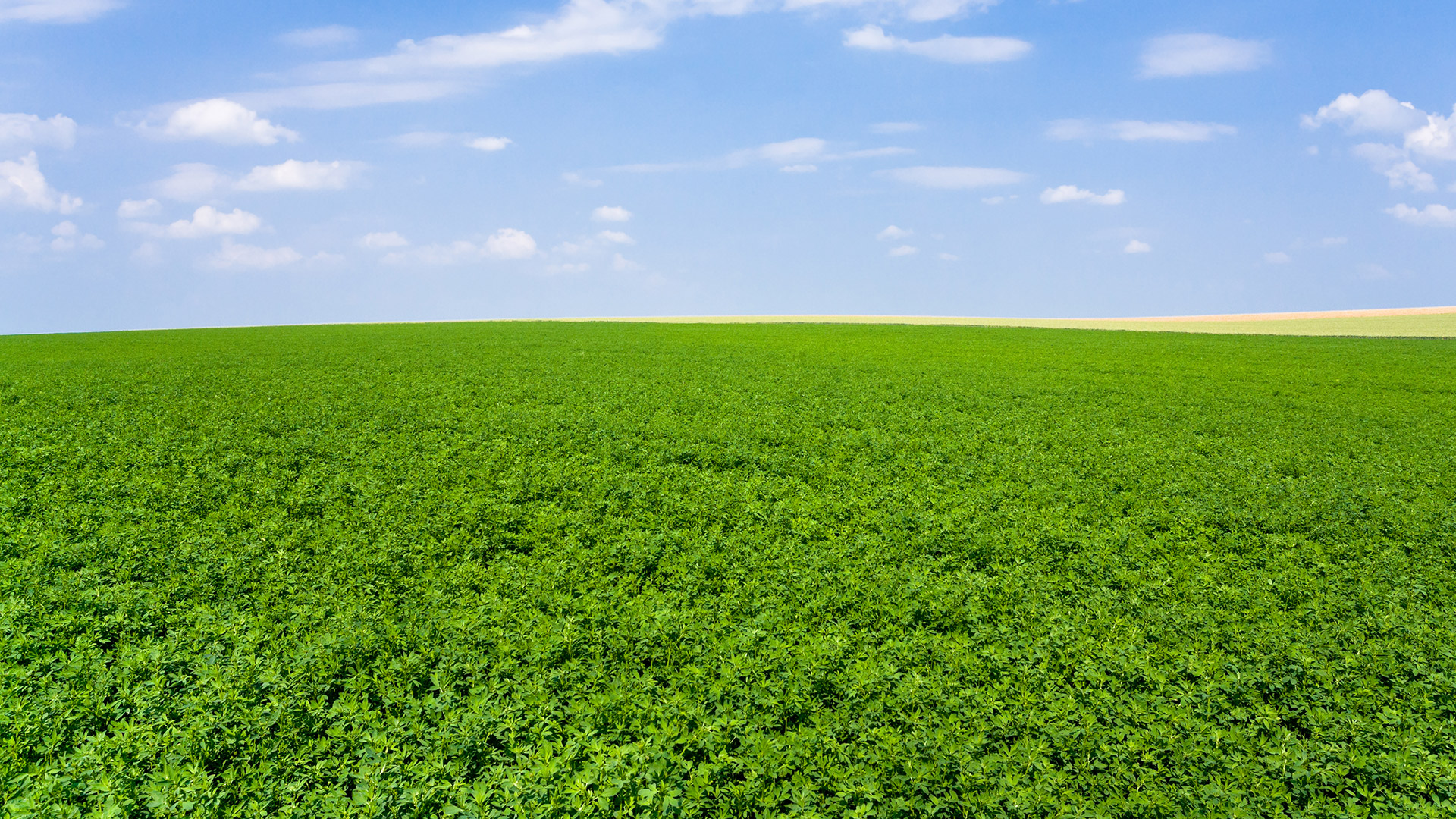